BERLIN, Germany, Oct 14, 2016 –​ Graebert, the pioneer in developing high-performance CAD solutions across desktop, mobile and cloud, and Computer System Technology Co. Ltd. (CST), announced the expansion of their collaboration in a joint-venture to be named Graebert Japan. 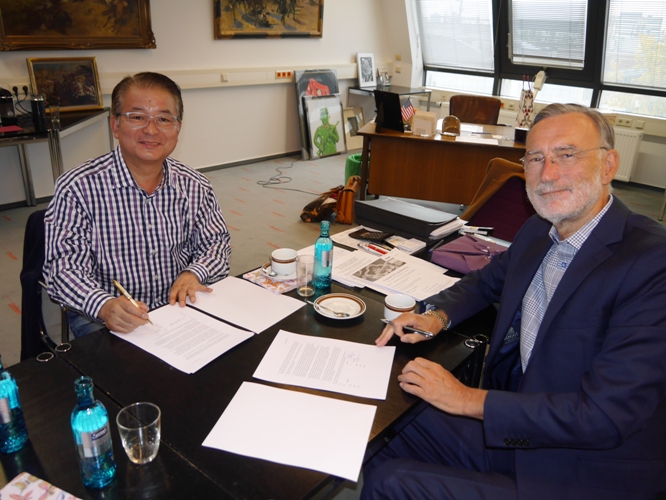 The collaboration between CST and Graebert started three years ago when CST founded a Japanese subsidiary, JDraf Co. Ltd., to distribute and promote an OEM version of ARES Commander rebranded as “JDraf”. JDraf established itself as one of the leading CAD solutions in Japan within only three years. JDraf is now used by thousands of companies in Japan including the top 3 construction groups.

The creation of this joint-venture demonstrates new ambitions for the Japanese market, which is the second largest for CAD software worldwide. CST’s fully-owned subsidiary JDraf will be renamed as “Graebert Japan” and become the exclusive distributor of the ARES CAD software in Japan while Graebert will acquire a 50% participation in the company. In parallel, the Japanese brand “JDraf” will be replaced by Graebert’s global product line with ARES Commander (Windows, Mac and Linux), ARES Touch (Android and iOS) and ARES Kudo (Cloud).

Yoshiyuki Nagao, chairman of the board of CST commented: “Over the last three years, Graebert and our subsidiary JDraf worked intensively to meet the specific demands of the Japanese market and establish itself as the number one alternative for CAD in DWG. We see now a very strong demand for the mobile and cloud versions of the ARES CAD software and expect Graebert will give us a strong competitive advantage to become the market leader in our country. The new joint-venture shows our strong ambition for the ARES CAD Software and Graebert Japan will benefit from an extended support from the CST group, with 141 salespeople that will be involved in the distribution of the ARES CAD software across our 21 offices in Japan.”

Wilfried Graebert, CEO of Graebert added: “CST has shown an outstanding performance in Japan, and we are very proud to see the result of our collaboration after only three years. They were in particular very successful in breaking into the leading construction firms, whose influence in Japan is very strong on the market. Many of these large customers have thousands of iPads and a growing interest for Cloud. We therefore see a strong interest for the synergies offered by the ARES CAD software across desktop, mobile and cloud.”

At the Graebert Annual Meeting, Graebert also announced that Japanese customers will benefit from an early access to the iOS version of ARES Touch from end of October 2016 in the Apple Store, while the rest of the world will benefit from a general availability end of November 2016 with the release of ARES Commander 2017. The release in Japan is synchronized with the release of a Service Pack for the Windows version of JDraf. Graebert commented that this early release is also aimed at rewarding the enthusiasm of its Japanese customers and beta testers.

Computer System Technology Co. Ltd. is a company headquartered in Sendai, Japan, that specialize in the development and distribution of CAD and BIM software for Civil Engineering and Construction. Founded in 1986, CST could establish a wide presence on the Japanese market nearly 600 employees spread across 21 offices and a strategic distribution alliance with Ricoh. Their mission is to facilitate the transition to the new technologies in the Construction industry and their customers include most of the major construction groups, medium-size builders and contractors in Japan.

Graebert is a leading developer of CAD software, solutions and services. They are recognized as a true innovator in the CAD industry and have more than 30 years of expertise. Their DWG-based CAD systems were the first to run on Windows, Mac and Linux. Graebert is also a pioneer in mobile CAD technologies on Android and iOS. Most recently, Graebert announced ARES Kudo, a full DWG-based CAD platform for the cloud.

Graebert‘s product portfolio is anchored by the ARES CAD software – a powerful suite of DWG-based CAD software for desktop, mobile and cloud – which also enables developers to create standalone CAD applications. Overall, millions of professionals use our CAD technologies in more than 100 countries. They also specialize in building surveying software and services. The SiteMaster line of “as built” surveying solutions, as well as worldwide surveying services are included under Graebert‘s iSurvey brand and division.